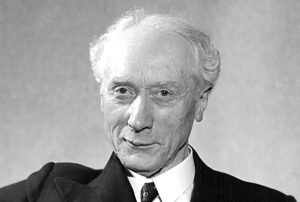 An elocutionist without a voice

When he came from the stage, battles had been fought. Kings had murdered their opponents. Witches danced across the stage. A dead woman drifted along a river. A young woman was compared to a summer´s day. But the voice with which F.M.Alexander let Shakespeare´s world come alive grew weaker after every performance. The young Australian´s career as an elocutionist had only just begun – and was already endangered. No matter what doctors and specialists prescribed – whether medical treatment, different voice techniques or simply to rest the voice – nothing helped. The hoarseness grew worse. Alexander´s career was at stake. To speak or not to speak – that was the question.

Not only his voice failed

„What is the cause of my hoarseness?“ Alexander asked his last doctor. „What am I doing wrong when I use my voice, what am I doing to make it hoarse?“ The doctor could not give him an answer. „Then I must find out myself.“ With these words Alexander set out on his long path of self-discovery and self-healing. From now on he studied the way in which he spoke in front of a mirror, for several hours a day. He observed the slightest movements of his head, the depression of the larynx, the gasping and sucking in of breath, and soon came to a remarkable conclusion. His loss of voice was not an isolated symptom – his entire organism was involved in producing this symptom. Alexander, who had suffered from ill health since his early childhood, particularly with his respiratory system, discovered more and more about the complex interplay between the head, neck, throat and back. Many of his harmful habits originated here. Aside from the physical mechanisms, it appeared that psychological processes also played a role. As a result, Alexander expanded his field of research.

Insight is the first step towards self-improvement (a fault confessed is half redressed). Real, lasting change is more difficult to achieve. Alexander soon noticed that he could not trust his own kinesthetic sense. When he believed he was moving his head upward, he was in fact pulling it back and down. Again and again, Alexander had to verify his self-perception by looking in a mirror. Above all he had to find a way to prevent his „instinctive“ reactions, which always prevailed. He had to „inhibit“ and redirect himself. It took a long time, but in the end Alexander gained control over the different interconnected mechanisms that had impaired his speaking. His chronic hoarseness was gone. And more than that: he had revised his entire organism and had thereby found the key to a method that addressed the whole rather than curing symptoms. Alexander´s conclusion was simple: if someone´s voice failed, it was not enough to use the voice in a different way. The entire organism needed to undergo revision. The same principle applied to all other bodily functions: if the use of an organ was faulty, „the whole“ had to be relearned – the use of the self, as Alexander called it.

A school for the self …

Alexander viewed the „self“ as a kind of musical instrument. In our daily practice we easily develop techniques that promote error and prevent real progress. These inadequate and harmful techniques, which differ from one person to the next, must be replaced by a more effective and above all manageable technique. This is the idea underlying the technique developed by Alexander. Its big merit lies in the fact that it is universally applicable. After going through his own painful process Alexander soon became an expert in other forms of „misuse of the self“. Amongst his acting colleagues he was known as „the breathing man“, but his advice was valued not only in questions regarding the respiratory mechanism. Doctors recognized his extraordinary abilities and sent him patients who were suffering from complex functional disorders. He became the director of the Operatic and Dramatic Conservatory in Sydney and continued to develop and refine his method. When he moved to London in 1904 his work – from then on referred to as the „Alexander Technique“ – became known in Europe and America. In 1924, aged 55, Alexander founded a private primary school in Kent, where his technique was made the basis of the curriculum. Three years later, he started delivering the first training course for Alexander Technique teachers. At 79, Alexander had a stroke which resulted in one-sided paralysis. Once more he was able to regain control and full mobility thanks to the application of his own technique. Frederick Matthias Alexander died in 1955 at the age of 86. Today his technique is taught by more than 3000 teachers worldwide.