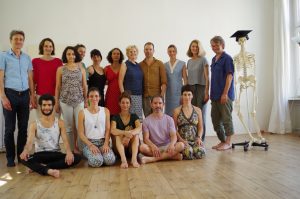 Our school is acknowledged by both the national Alexander Technique association (ATVD) and the Affiliated Societies (ATAS, the international association of national societies), as well as by the city government. Students can make use of this to receive reductions.

Classes are a mixture of practical and theoretical work in a group of max. 15 students, with the director of training and one assistant. Practical work takes up about 80% of class time.

You can begin the training course at any time, as long as there is a free place. Some trainees may see the training as a means of supporting or furthering their personal development and may not wish to practice the Alexander Technique as a profession. This is a legitimate option.

Alexander´s principles form the basis and key element of the training course.

Each student explores these principles in working on himself as well as in exchanging work with fellow students. In the last year of training students practise working with volunteers. This enables the student to pass on the acquired knowledge independently and creatively after completion of the training course. Aside from the traditional approach to learning the Alexander Technique we occasionally work with methods and texts from such fields as music, dance, acting, and education.

The Alexander-Technik-Schule Berlin is directed by Jörg Aßhoff, but understands itself as a team of teachers. Members are:

Jörg Aßhoff| Director of training: has been teaching since 1993 in his own private practice. In 2004 he founded the „Alexander-Technik-Schule Berlin”. He is a moderator at three teacher training courses in Germany and France.

Petra von Ondarza| Assistant: began studying the AT in 1985 in Paris while training in contemporary dance and Contact Improvisation. She has been assisting on the training course since it opened in 2004.

Ulrich Bitter| Assistant | deputy head of the training course: has been giving lessons in the AT since 1992 in his own studio. He was member of the board of ATVD (German society of Alexander teachers) for five years. He has been assisting on the training course since it opened in 2004.

Teresa Wiesehöfer| Assistant: Studied drawing and sculpturing. Since 2015 teacher of the Alexander technique in the training course.

Wilfried Hanefeld| Moderation of training course: has a university degree in pedagogy and qualified as a teacher of the Alexander technique in 1983. In 1984 he was a founding member of the Gesellschaft der Lehrer für Alexander Technik e.V. (the German society of teachers of the Alexander Technique, now: ATVD), whose work he developed and supported actively as first resp. second chairman for ten years.

We are also in contact with several other training courses whom we visit and are visited by at regular intervals to exchange work. Currently these are the training courses in Freiburg (Aranka Fortwängler), Hamburg (Ulli Pawlas), Paris (Agnès de Brunhoff) and Rouen ( Maud Krhajac).

If you are interested in taking the teacher training course you are very welcome to join the class as a guest! Please make an appointment!