Due to the Corona crisis, we are particularly mindful of all our activities and constantly adapt to your wishes, the current conditions and the rules. Regular airing and hand washing are a matter of course! 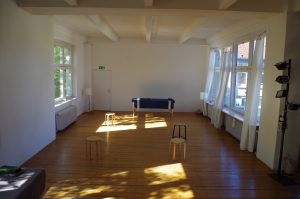 These courses are open for beginners as well as advanced students.

The workshops can also give you an idea of what the work in the teacher training course involves.

The teachers work with everyone individually, going from person to person, using delicate touch as well as verbal explanation. At the same time, participants are encouraged to explore the principles of the technique for themselves. Questions and difficulties are discussed in the group and can be related to the immediate bodily experience.
There are also activities which involve the whole group. We work on simple, guided everyday movements and on basic positions such as sitting, standing and lying.

Petra von Ondarza
studied dance from 1983-87 in Vienna and Paris. She began the Alexander training course 1985-87 in Paris and completed it 1990-91 in Hamburg. Since then she has been working mainly in private practice. 1992-96 she trained in Body-Mind Centering/Integrative Movement Therapy with Linda Hartley. In 2010, she completed an M.A. in religious studies at the FU Berlin. She has been assisting in the training course since 2004.

Jörg Aßhoff
has been teaching since 1993 in his own private practice. Additionally, he has been teaching 15 years at the Universität der Künste (university of performing arts), community centers (Volkshochschule) and speech therapy schools. In January 2004, he founded the Alexander-Technik-Schule Berlin. He is a moderator at three teacher training courses in Germany and France.